Is Nvidia the Best Stock to Buy During This Bear Market? | The Motley Fool

Among the wreckage of stocks that are significantly down from all-time highs, you’ll find Nvidia (NVDA -0.83%). The graphics processor unit (GPU) manufacturer was previously a highly valued tech stock, but it has fallen more than 50% since last November.

Despite the price drop, Nvidia’s financials and outlook were solid in the company’s most recent quarter. So does this make Nvidia the best buy in this market? 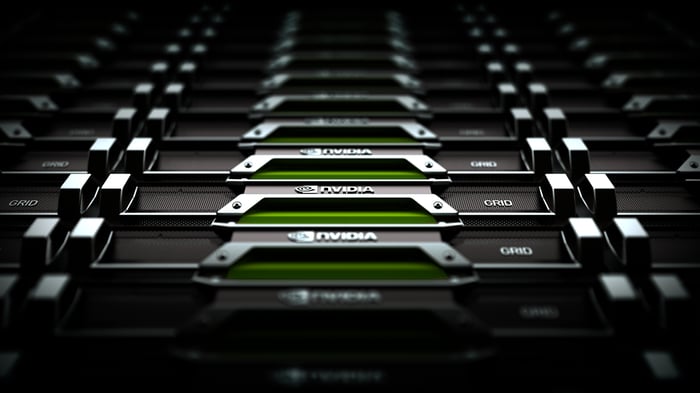 Nvidia’s business can be summed up in three parts: data center, gaming, and everything else. The data center division recently passed gaming as Nvidia’s largest by revenue and shows no signs of slowing down. During Nvidia’s first-quarter (ending May 1) conference call, CEO and founder Jensen Huang stated: “Our Data Center demand is strong and remains strong” when asked if macroeconomic headwinds were affecting that segment. With more businesses harnessing cloud computing and artificial intelligence (AI), this segment will continue growing for years.

The gaming division can be slightly misleading. While Nvidia produces best-in-class GPUs for gaming applications, these same GPUs are also used to mine cryptocurrencies. Regardless of whether you believe in crypto, there’s no denying that cryptocurrency prices have crashed in 2022. Because these GPUs can be used both for gaming and for mining, management has difficulty pinpointing what percentage of its gaming sales are attributable to miners. Without this line of sight, investors may be haphazardly walking into a trap if crypto miners quit purchasing new equipment for their mining operations.

Finally, Nvidia has two segments in what I classify as “everything else.” First, its professional visualization platform provides customers with collaborative 3D work environments, known as the Omniverse. Second, Nvidia has an automotive category that is working on self-driving cars. Combined, these segments only made up 11% of first-quarter revenue, so they don’t affect Nvidia too much in the short term.

For investors, the question remains: “Can Nvidia’s data center growth offset the potential drop due to wilting crypto mining?”

A one-time charge is affecting Nvidia’s financials and valuation

During Q1, revenue grew at an impressive 46% year-over-year clip to $8.3 billion. However, the data center segment far outpaced gaming, turning in 83% year-over-year growth compared to 31% in the year-ago period. As for profitability, Nvidia doesn’t break out its segments, but it reported non-GAAP earnings per share (EPS) rising 49% year over year overall. Non-GAAP earnings are vital for Nvidia this quarter as the company had to take a $1.35 billion charge for terminating the Arm Holdings acquisition.

Even with the charge-off, Nvidia had more than $20 billion in cash and equivalents with $10.9 billion in debt.

For Q2, Nvidia expects revenue to be around $8.1 billion, indicating a 24% rise. Nvidia attributes this “slow” growth rate to Russia’s actions and China’s COVID-19 lockdowns. Still, this is a strong outlook considering the economic environment.

Management didn’t discuss crypto risk, so investors can assume they already factored this into the overall growth. However, the real drop in crypto prices came as the calendar turned to June, meaning management could not comment on recent falling crypto demand (the call took place on May 25).

The market has assumed Nvidia will feel the effect of this slowdown, as its valuation has been slashed in the past few weeks. 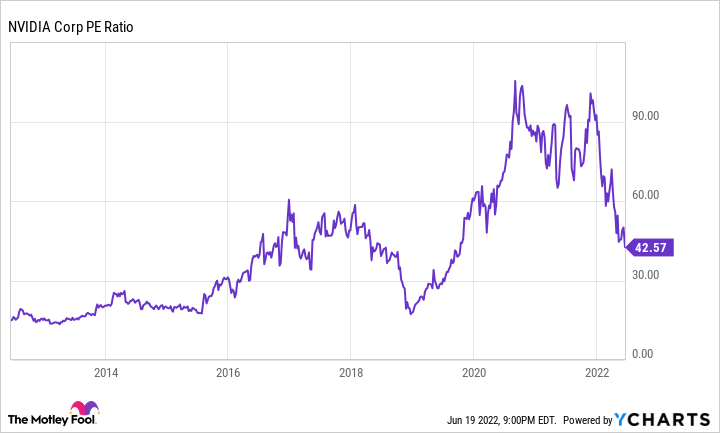 This price-to-earnings (P/E) chart reveals a lot about Nvidia’s stock. Right now, Nvidia is trading at a two-year low. Before 2020, Nvidia had massive GPU inventories caused by — you guessed it — cryptocurrency demand evaporating. The Nvidia now isn’t the Nvidia of three years ago as it is a more balanced business, and most Nvidia GPUs are rarely in stock. This strength means Nvidia shouldn’t have the inventory problem it experienced during the last crypto-drawdown cycle.

At 42 times earnings, this number is artificially high; it reflects the one-time charge-off due to the terminated Arm acquisition. Because its “true” earnings are higher, this increases the denominator of the valuation metric, which would drop the P/E ratio to about 37.2. This discrepancy means Nvidia’s stock is cheaper than it appears, and I think investors should pounce on it.

The growth Nvidia is experiencing in data centers will remain strong until cloud deployment and AI research are complete. That could be a long way away. If the Omniverse or self-driving technology takes off, these segments could also spur massive growth. As for gaming, gamers will always demand the latest and most powerful technology to have an advantage, so that cycle will continue driving growth. While crypto mining may provide some headwinds, I don’t think it’s enough not to purchase the stock.

Nvidia has some difficulties, so it may not be the best stock to buy in the market. But I think it is one of the better buys in today’s bear market. Investors who buy today will be thanking themselves three to five years later.


Read More: Is Nvidia the Best Stock to Buy During This Bear Market? | The Motley Fool

The 9 Best Stocks for Beginners

Maxxa_Satori / iStock.comLearning how to invest in stocks as a beginner can be a daunting task. There are thousands of securities to consider, and no particular strategy or...

My top 5 stocks to buy in February

Image source: Getty ImagesWith January coming to an end, I’m looking ahead to investment opportunities in February. And I’ve got five companies on my list of stocks to...

Image source: Getty Images There are a few top stocks out there for which investors should really question why they aren’t already in their portfolios. In the case...

What to Watch as We’re Overbought

Note: Meisler will be away for two weeks and will have limited access to email. The next edition of Top Stocks will be Jan. 29.Since I will be...

Stock Market in Focus; Indonesian Stocks Record a Good Performance in 2022, What About

Why Soliton Popped While the Market Slid Today | The Motley Fool

6 Best Healthcare Stocks To Invest In for 2022