1 Popular Nasdaq Stock to Buy Hand Over Fist, and 1 to Avoid | The Motley Fool

For investors with a long-term focus, the 2022 bear market provides plenty of buying opportunities. High-quality businesses like Visa and Alphabet are trading at discounted earnings multiples for the first time in years (if you exclude the brief March 2020 market collapse). At the same time, there are many popular stocks that are unlikely to put up good returns this decade.

As an investor, it is important to research the companies in your portfolio so you can better determine which stocks fall into which of these two categories. to help you in your search, let’s talk about one stock from each grouping. Here’s why Electronic Arts (EA 0.89%) is a cheap stock worth buying right now, and why you might want to avoid investor favorite Tesla (TSLA 4.12%).

EA is one of the largest independent video game publishers in the world. The company has been around for decades as a public company. Since its IPO in 1989, the stock has returned almost 25,000% for long-term shareholders and now sits at a market cap of $32 billion.

Why has EA stock been such a strong performer? Because of the general tailwind of the video game industry, its track record of successful acquisitions, and its diversified set of gaming franchises. The video game industry grew immensely over the past few decades, going from a niche entertainment medium in the early 1990s to just under $200 billion in annual global spending today. 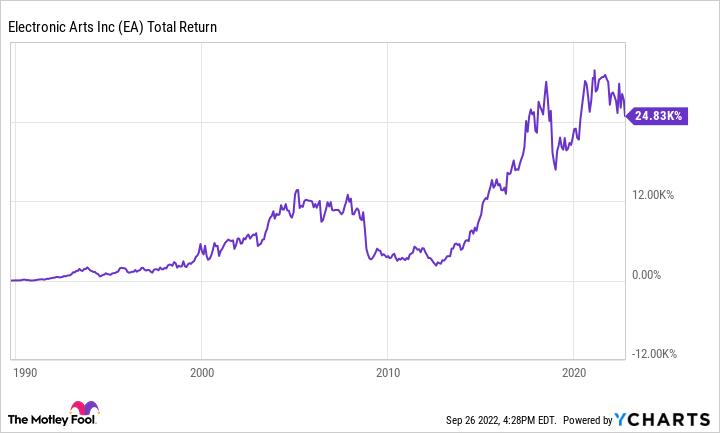 EA has been able to ride this wave over the years. The company has been a smart consolidator in the industry, acquiring studios like Maxis and Respawn that have produced live services games like The Sims and Apex Legends, both $1-billion-revenue-a-year franchises. On top of this, EA has a lock on many sports simulation games, the most important being FIFA Soccer and Madden NFL.

Outside of live services, EA has multiple studios working on games including three Star Wars titles, an Iron Man game, a Dead Space remake, and multiple racing games. This combination of live services plus a diversified group of revenue-generating games makes EA’s revenue generation quite reliable.

This fiscal year, management is guiding for $1.6 billion in operating cash flow at the low end of its guidance. Operating cash flow is the best metric for measuring the profitability of a video game business because of the strange revenue recognition standards in the industry. If that guidance is hit, the stock would have a price-to-operating cash flow (P/OCF) of 20, which is quite reasonable given EA’s track record of earnings growth.

However, this number understates EA’s true earnings power because of the timing of upcoming game releases, a lot of which are coming next fiscal year. EA is spending money on those titles right now but won’t earn any revenue until they are officially released to the public. What this means is that three to five years from now, EA’s operating cash flow could be much higher than $1.6 billion, and could likely hit close to $3 billion a year. If it does, the stock will do well over that timeframe.

The electric vehicle (EV) market is growing rapidly. Projections are that tens of millions of EVs will be on American roads by the end of this decade, and with new cars selling for a pretty penny, the revenue opportunity for companies is enormous. This has clearly helped leaders in the space like Tesla, which has grown its revenue per share by 21,000% over the past 10 years.

Investors love Tesla. The stock is the ninth most popular stock among users of the Robinhood Markets investing platform right now, which suggests some of this article’s readers likely own the security. Long-term shareholders have made a boatload, with shares up around 15,000% in the last 15 years. But that doesn’t mean it is smart to own Tesla stock today.

Here’s the problem: Tesla’s stock has already priced in the company’s projected domination of the EV market. At a market cap of $875 billion, the stock trades at a price-to-free cash flow (P/FCF) of 136. A stock is only worth the amount of free cash flow a business is going to generate in the future, and right now, investors are yielding less than 1% in free cash flow with Tesla (the inverse of a P/FCF). That’s way less than what you can earn in short-term treasury bills (and significantly less than the average stock). This means that to even justify the current share price, Tesla’s free cash flow needs to grow by a considerable amount, and quickly. 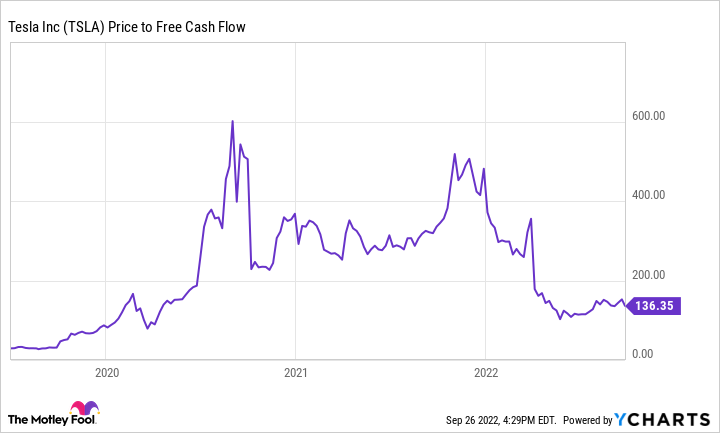 In a low-margin industry, this means it will have to achieve massive scale and hundreds of billions of dollars in revenue. Could the company achieve this if it maintains its leadership in the EV space? Sure. But remember that this is just to make sense of its current stock price.

If you expect the stock to grow in value this decade, Tesla will likely need to start generating over $100 billion in annual free cash flow, something only two companies — Apple and Microsoft — have ever achieved. With all the competition in the automotive industry, this seems unlikely for Tesla if it only sells EVs, the company’s only sizable business unit at the moment.

Unless you think Tesla is going to invent a new business line that will create another $1 trillion in value for shareholders, it is hard to see how the stock is going to put up positive returns this decade. The numbers just don’t add up.


Read More: 1 Popular Nasdaq Stock to Buy Hand Over Fist, and 1 to Avoid | The Motley Fool

A Sitcom Character Inspired This Investor | The Motley Fool

In this podcast, Motley Fool senior analyst Ron Gross discusses topics including: Getting inspiration from a sitcom character. Buying his first stock from research in an investing newsletter....

To get a sense of who is truly in control of L&T Finance Holdings Limited (NSE:L&TFH), it is important to understand the ownership structure of the business. With...

Private companies in BBMG Corporation (HKG:2009) are its biggest bettors, and their bets

A look at the shareholders of BBMG Corporation (HKG:2009) can tell us which group is most powerful. We can see that private companies own the lion's share in...

This investment column is all about disclosure and guaranteeing readers that I back up what I write with my own money. Hundreds of you emailed since my introductory...

Caterpillar’s Earnings Are Good and Sales Top Estimates. But the Stock Falls.

ETY: Not Nearly As Attractive As It Looks