Want to Get Richer? 3 Top Stocks to Buy Now and Hold Forever | The Motley Fool

There isn’t just one recipe to build wealth over time. There are many ways to get there. But a particularly good one is identifying solid companies set to bring in revenue and profit well into the future. And you can find some excellent candidates in the world of healthcare.

Let’s talk about two leaders in their markets and a well-diversified healthcare company with a track record of success. They each have what it takes to keep winning — and this should score wins for your portfolio too.

Vertex Pharmaceuticals (VRTX 2.88%) has been generating returns for investors for quite a while. Over the past 10 years, it’s far surpassed the performance of the S&P 500 Index, for example. 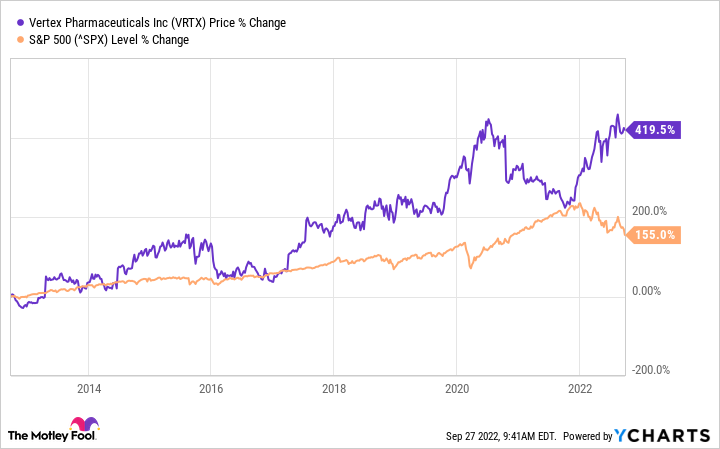 Vertex is the global market leader in the treatment of cystic fibrosis (CF). The company sells four CF drugs. And the latest — Trikafta — brought in more than $5.6 billion in revenue last year.

This product has plenty of growth ahead as it continues to win approvals in new age groups and reimbursements in various countries. Vertex may ensure lasting leadership in this market: The company is studying a candidate in phase 3 trials that may be even better than Trikafta.

Shares of Vertex have defied the bear market this year for one big reason. Vertex plans to submit its blood disorder candidate for regulatory approval in the U.K. and Europe this year. And Vertex aims to complete its submission in the U.S. in the first quarter of next year. This is a one-time curative candidate — and in disorders with limited treatment options. So, this could be big for Vertex.

At the same time, the company is also working on promising candidates for much-needed therapy areas, such as pain and type 1 diabetes. Vertex generates billions of dollars in revenue today. And these potential products could result in blockbuster revenue down the road too.

You’ll want to pick up Abbott Laboratories (ABT -1.51%) for two big reasons: Its diversified product profile and its dividend payments. Let’s talk about products first.

Since the pandemic’s early days, diagnostics has also become a big revenue driver. That’s thanks to Abbott’s coronavirus tests for at-home and laboratory use. The company reported more than $2 billion in coronavirus testing sales in the quarter.

But even if coronavirus testing demand wanes, I’m not worried about Abbott’s growth. That’s thanks to its long-term strength in medical devices and its diversification.

Add to that Abbott’s status as a Dividend King, and you’ve got a pretty good package. Dividend Kings have raised their dividends annually for at least the past 50 years. That shows dividends are important to them. So it’s reason to believe they may continue on this path. That’s good news for you because it offers you passive income over time.

Intuitive Surgical (ISRG -0.83%) is the leader in its industry by far. The company holds nearly 80% of the global robotic surgery market.

Here’s even better news: It’s not likely a competitor will knock it down a notch any time soon. Surgical robots are million-dollar products. That’s quite an investment. And that means hospitals that have already installed one of Intuitive’s flagship da Vinci robots probably will stick with it. The fact that most doctors train on the da Vinci also weighs in Intuitive’s favor.

Intuitive doesn’t generate revenue only through da Vinci installs. In fact, it makes a greater share of revenue from sales of instruments and accessories hospitals must replace between surgeries. And Intuitive sells servicing contracts for the robots too. So, each device installed results in recurrent revenue.

Intuitive has a long track record of revenue and profit. But Intuitive saw revenue slip during certain stages of the pandemic. That’s as hospitals postponed surgeries. This may continue at times when coronavirus hospitalizations rise. But it’s a temporary situation. Patients will eventually need these da Vinci procedures. And Intuitive’s revenue and profit should continue to climb over time.

The industrial health care equipment industry is fragmented, which means there are plenty of opportunities for investors. This segment includes medical device manufacturers, diagnostic services providers and distributors....

Is Gevo Inc (GEVO) Stock at the Top of the Specialty Chemicals Industry?

The 39 rating InvestorsObserver gives to Gevo Inc (GEVO) stock puts it near the middle of the Specialty Chemicals industry. In addition to scoring higher than 43 percent...

As the year winds toward its close, it’s time once again to engage in the age-old practice of picking out the changes that lie waiting in the year...

If you’re looking for the best stocks to buy now and for the future, you’ve come to the right place. Stocks can be risky, but they can also...

The best industrial stocks offer their investors a sturdy combination of long-term growth, strong financials, and broad institutional backing. The riskier micro-sectors like vaping and marijuana are better...

Stock market news live updates: Stocks drop to give back some gains

Stock Market Today: All You Need To Know Going Into Trade On March 30