This Ultra-High-Yield Dividend Stock is Up 21% in the Past Month — Is It a Buy? | The

Rising interest rates have wreaked havoc on markets this year, impacting companies that use debt to fund their business. Owl Rock Capital Corporation (ORCC 0.73%) is a top lender to middle-market companies, with a stellar dividend yield of nearly 10%. But its stock has been on a volatile ride over the past few months.

Companies like Owl Rock Capital deliver high yields but come with some risks due to their sensitivity to interest rates and macroeconomic events. If you’re searching for a high-dividend yield, then the stock is quite appealing — but there is something you should know before buying.

A top lender to businesses that others overlook

Owl Rock Capital Corporation provides loans to middle-market companies. It is a business development corporation (BDC), meaning it provides loans and buys equity in businesses in the United States that banks may consider too risky. BDCs have similar tax rules to real estate investment trusts (REITs), which require them to pay out 90% of their earnings as dividends to shareholders.

Owl Rock’s bread-and-butter business is lending to companies with earnings before interest, taxation, depreciation, and amortization (EBITDA) of $10 million to $250 million and annual revenue of $50 million to $2.5 billion. The lender believes banks and institutional investors neglect this market segment due to stringent liquidity requirements. It says that those investors prefer to lend to big, established businesses — leaving a hole in funding for these smaller companies.

BDCs can be risky because many of their investments are in illiquid securities, which could lead to quick losses in the event of default or a series of defaults on loans. These companies also use leverage to juice returns, adding to the risks. For this reason, BDCs can offer appealing high-yielding dividends. Owl Rock Capital has paid out $1.24 in dividends in the past year, implying a dividend yield of 9.51%. 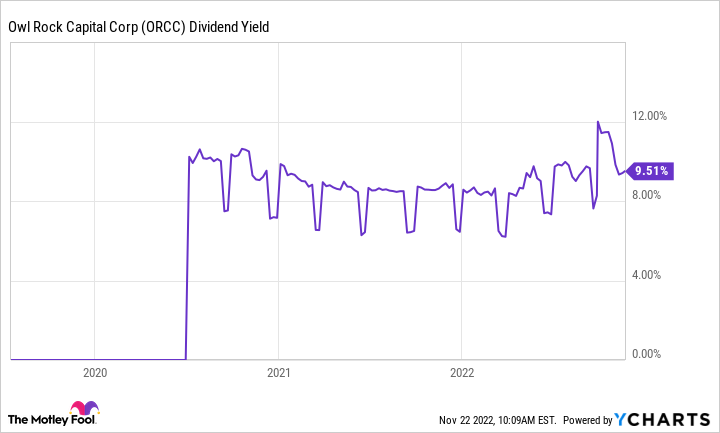 Over the last few months, Owl Rock Capital investors have been on a roller coaster ride. Investors seemed nervous about rising interest rates and how they could affect companies that use debt to finance their businesses.

Owl Rock stock fell 16% after the Federal Reserve announced its fifth rate hike of the year on Sept. 21, bringing its benchmark federal funds rate up to 4%. The VanEck BDC Income ETF, which holds several BDC companies, mirrored this move and fell around 15% simultaneously — showing it was a broad-based risk that investors were concerned about.

These concerns aren’t unfounded. Owl Rock is sensitive to changes in interest rates, which affect its debt investments and the debt it uses to finance its business. The company has $7.2 billion in debt, half of which is exposed to rising interest rates. The average cost of its debt is 4.3%.

However, its investment portfolio is worth $12.8 billion, and 98.3% of these investments have floating-interest rates, meaning it would benefit more from rising interest rates than it would pay out in interest expense. Its net investment income grew 12.5% from last year to $146.8 million thanks to those rising interest rates. These concerns eased when investors realized the rate increase wasn’t the end of the world, and Owl Rock rallied 28% since bottoming on Oct. 3.

The most significant risk for Owl Rock is if companies cannot pay their debts and default rates begin going up. If this were to happen, it doesn’t matter how many of its debt investments are floating-rate if they aren’t repaid. However, that risk isn’t really worrisome at the moment as 99% of Owl Rock’s investments are performing, meaning companies are continuing to pay down their interest and principal payments. However, if loan defaults start rising, the company could be at risk of writing down debts and losing out on future interest income. These risks are why Owl Rock is a high-risk, high-reward dividend stock.

Owl Rock Capital recently raised its dividend to $0.33 in the fourth quarter and declared a supplemental dividend of $0.03 per share, pushing its annual dividend yield above 10%, making it a stellar high-yield income stock for those willing to stomach the risk.

Read More: This Ultra-High-Yield Dividend Stock is Up 21% in the Past Month — Is It a Buy? | The

Welcome to this week’s edition of top stock market highlights. Singapore’s core inflation High inflation has been a bugbear for the economy in the last several months as...

Investing in Space: A launch guide

Ignition of the SLS rocket launching the Artemis I mission on Nov. 16, 2022.Bill Ingalls / NASACNBC's Investing in Space newsletter offers a view into the business of space...

The investment space is cluttered with variable fees and charges from one provider to another, so it can be a complicated business for investors—whether app-based or desktop-based—to work...

This year hasn't gone as expected for many investors. Following one of the lowest-volatility years in recent history, 2022 has featured the worst year for the bond market...

2 Top Bank Stocks to Buy in October | The Motley Fool