Jury: NCAA not to blame in ex-USC football player’s death 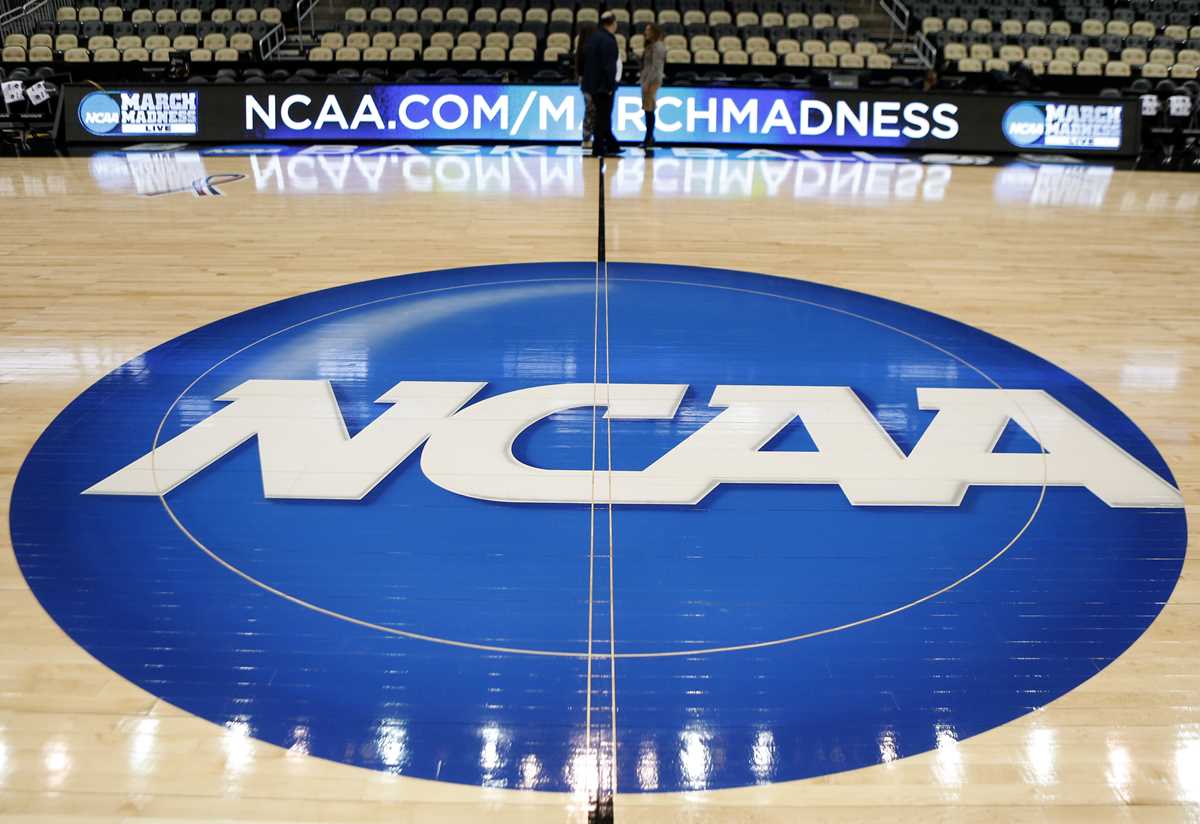 In this March 18, 2015, file photo, an NCAA logo is displayed at center court as work continues at The Consol Energy Center in Pittsburgh, for the NCAA college basketball second and third round games. A Los Angeles jury has rejected a claim by the widow of a former USC football player who said the NCAA failed to protect him from repeated head trauma that led to his death. The jury found Tuesday, Nov. 22, 2022, that the NCAA was not negligent in the death of Matthew Gee.(AP Photo/Keith Srakocic, File) 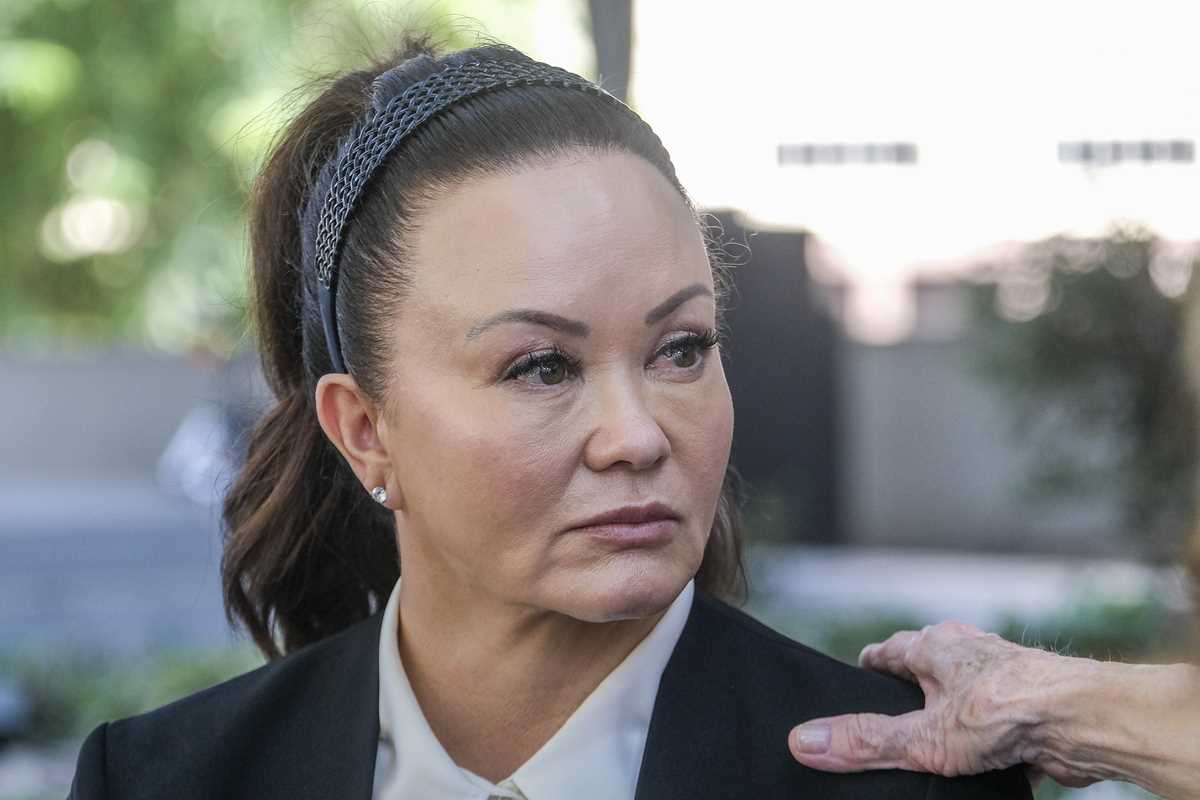 Alana Gee, the widow of a former University of Southern California football player suing the NCAA for failing to protect her husband from repetitive head trauma, leaves the Stanley Mosk civil courthouse of Los Angeles Superior Court on Oct. 21, 2022. A Los Angeles jury has rejected a claim by the widow of a former USC football player who said the NCAA failed to protect him from repeated head trauma that led to his death. The jury found Tuesday, Nov. 22, 2022, that the NCAA was not negligent in the death of Matthew Gee. (AP Photo/Ringo H.W. Chiu, File)

LOS ANGELES (AP) — In a verdict that could affect countless claims by athletes who sue sports organizations for head injuries, a Los Angeles jury on Tuesday rejected a lawsuit seeking $55 million by the widow of a former USC football player who said the NCAA failed to protect him from repeated head trauma that led to his death.

Matthew Gee, a linebacker on the 1990 Rose Bowl-winning squad, endured an estimated 6,000 hits as a college athlete, lawyers for his widow said. They alleged those impacts caused permanent brain damage, and led to cocaine and alcohol abuse that eventually killed him at age 49.

The NCAA, the governing body of U.S. college sports, said it had nothing to do with Gee’s death, which it said was a sudden cardiac arrest brought on by untreated hypertension and acute cocaine toxicity.

Hundreds of wrongful death and personal injury lawsuits have been brought by college football players against the NCAA in the past decade, but Gee’s was the first one to reach a jury. The suit alleged that hits to the head led to chronic traumatic encephalopathy, a degenerative brain disease known by the acronym CTE.

Judge Terry Green told jurors in Los Angeles Superior Court they “made history” in the first case of its kind.

“Any plaintiff’s attorney is going to think twice before putting all the chips on the table and pushing them to the middle and saying, ‘We’re going to take our case to trial and see what happens,’” Lust said.

Alana Gee choked up as the verdict was read and had tears in her eyes afterward. She told one of her lawyers that she didn’t understand how the jury came to the decision, but thanked the seven women and five men on the panel personally as they left the courtroom. She declined to comment afterward.

Gabe Feldman, a sports law professor at Tulane University, said proving Gee died specifically from invisible injuries suffered at USC — and not something that occurred before or after his college career — was always going to be challenge, especially when he had so many other health problems.

That was further complicated by the NCAA argument that they did the best they could for safety with the information they had at the time, and that players assumed the risks of an inherently dangerous sport.

“Given the unpopularity of the NCAA and a sympathetic plaintiff, and the jury still ruled against the plaintiff, that’s fairly telling,” Feldman said. “This was a calculated risk by the NCAA taking this to trial knowing that this could possibly be a bellwether case that could potentially provide a roadmap to hundreds or thousands of other plaintiffs.”

The jury had to vote at least 9-3 to reach a verdict on questions asking whether the NCAA did something or failed to do something that increased risks to Gee and whether it failed to take measures that would have minimized risks to Gee without altering the sport of football. The panel voted 11-1 and 10-2 answering those questions in favor of the NCAA.

“We feel deep sympathy for the Gee family right off the bat,” said NCAA attorney Will Stute. “But we feel like this verdict is a vindication of the position we’ve taken in all these cases, which is the science and medicine in Matthew Gee’s circumstance did not support causation.”

Stute had argued that medical evidence is not clear on what causes CTE, and what the impacts are from that disease.

Attorneys for Gee said CTE, which is found in athletes and military veterans who suffered repetitive brain injuries, was an indirect cause of death because head trauma has been shown to promote substance abuse.

Alana Gee had testified that the college sweethearts had 20 good years of marriage before her husband’s mental health began to deteriorate and he became angry, depressed and impulsive, and began overeating and abusing drugs and alcohol.

The NCAA said the case hinged on what it knew at the time Gee played, from 1988-92, and not about CTE, which was first discovered in the brain of a deceased NFL player in 2005.

Gee never reported having a concussion and said in an application to play with the Raiders after graduating that he had never been knocked unconscious, Stute said.

“You can’t hold the NCAA responsible for something 40 years later that nobody ever reported,” Stute said in his closing argument. “The plaintiffs want you in a time travel machine. We don’t have one … at the NCAA. It’s not fair.”

Mike Salmon, a teammate who went on to play in the NFL, testified that Gee, who was team captain his senior year, once was so dazed from a hit that he couldn’t call the next play.

Gee was one of five linebackers on the 1989 Trojans squad who died before turning 50. All displayed signs of mental deterioration associated with head trauma.

As with teammate and NFL star Junior Seau, who killed himself in 2012, Gee’s brain was examined posthumously at Boston University’s Chronic Traumatic Encephalopathy Center and found to have CTE.

Jurors were not allowed to hear testimony about Gee’s deceased teammates.

Alana Gee’s lawyers had argued that the NCAA, which was founded in 1906 for athlete safety, had known about impacts from head injuries since the 1930s but failed to educate players, ban headfirst contact, or implement baseline testing for concussion symptoms.

Many of us will read this and be oblivious to the worldwide crisis. But if the current trends continue, it will become real to all of us soon enough. Most of us learned in elementary school that 97% of the world’s water is salt water. And only about 1% of the total water supply is drinkable.

That is becoming difficult math for several areas of the world. A severe, multi-year drought is causing water levels to sink to historically low levels. And the federal government is threatening to cut water use by 25% in the most-affected states of Arizona, California, and Nevada.

And even if we’re not put under water restrictions, we are all likely to see higher costs for food. One reason for that is that about 25% of the nation’s food supply comes from California. An American Farm Bureau Federation survey conducted in 2021 found that 40% of farmers sold off part of their cattle herds.

But opportunities present themselves in the midst of crisis, and this is no difference. In this special presentation, we’re looking at seven water stocks that look like smart buys as the world grapples for solutions.

KUALA LUMPUR, Nov 22 — Azam Aris, the editor emeritus of local business newspaper The Edge, was today acquitted and discharged of one criminal defamation charge after being...

Source: MarbellaStudio / Shutterstock.com The trends in the tech sector are becoming more entrenched. Today, Helbiz (NASDAQ:HLBZ) is the latest company to announce a significant round of layoffs....

The healthcare industry is one of the biggest and most varied industries, with a wide range of businesses that sell medical products and provide medical services. Sectors within...

Why Everyone Pays Attention to FedEx | The Motley Fool

Is the Stock Market Going Up? It Might Depend on the Definition of Recession.